The country is overdoing its stadium-building 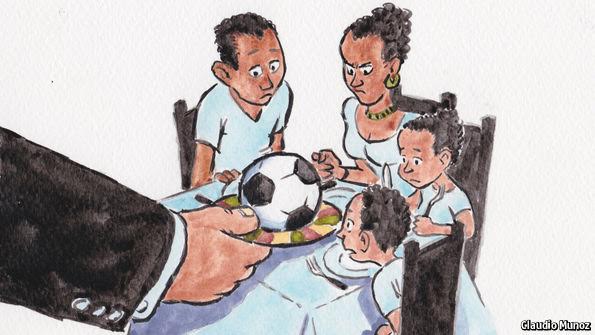 BROKEN windows, fraying nets, chairs with missing legs; the Yidnekachew Tessema Stadium in Addis Ababa has seen better days. Rehabilitated by Emperor Haile Selassie after his return from exile in 1941, it was once a proud monument to Ethiopia’s restored independence following five years of Italian occupation. In 1962 it hosted the African Cup of Nations (Afcon); the national football team, known as the “Walias”, won. But the Walias, like their stadium, have struggled since. In 2012 they ended a 31-year stretch in the wilderness by qualifying for Afcon. In 2013 they duly crashed out in the first round.

Enough is enough, says the government. Ethiopians are proud of their sporting heritage: the country’s long-distance runners are among the best in the world. “We were the founders of African football,” says Juneydi Basha, head of the Ethiopian Football Federation. Addis Ababa hosts the African Union; the government wants it to host Afcon again.

In every big town, new football stands are going up. The federal government, which is paying, says eight “world-class” stadiums—each with a capacity of at least 30,000—are being built. Six smaller ones are also under way in the capital. The flagship is a 60,000-seater (as big as Arsenal’s Emirates stadium in London) in the centre of Addis Ababa, being built by the Chinese State Construction and Engineering Corporation at a projected cost of at least $110m

Ordinary Ethiopians scent folly. The ruling Ethiopian People’s Revolutionary Democratic Front (EPRDF), has a solid reputation for managing the country’s infrastructure, but the stadium programme has people talking. The claim that it is simply responding to popular demand seems doubtful. “It makes no sense,” says Leoul Tadesse, a local sports journalist. “Building stadiums won’t solve our problems.” Football enthusiasts cramming into bars underneath the old stadium to watch European football matches point out that state-of-the-art infrastructure is no substitute for skills. Just look at England, which has a rich, fabled league but a poor national team.

Is the EPRDF, which has governed Ethiopia since winning power in 1991 after a decade of armed struggle, scoring an own goal? The country’s revered former prime minister of 17 years, Meles Zenawi, would probably not have let the programme kick off. The stern veteran of the EPRDF’s bush war, who died in 2012, is said to have remarked once that Ethiopia needs fertilisers, not stadiums. With the country only just starting to recover from drought—and this week wracked by widespread anti-government protests, in some of which security forces are accused of having fired into crowds—those words now seem prescient.