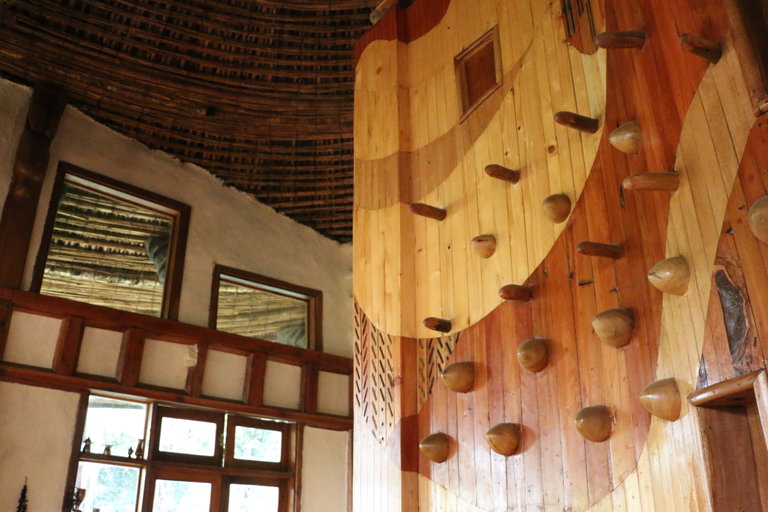 The Zoma Contemporary Art Center was founded in 1982 and took seven years to complete. Each of the center’s buildings has unique features inside and out. Credit Meskerem Assegued

ADDIS ABABA, ETHIOPIA — Outside the walls of the Zoma Contemporary Art Center, the distinct chaotic clatter of Addis Ababa — goats bleating at a nearby market, cars kicking up dust on the dirt road — fills the air.

Yet inside the compound that houses the center is a haven of calm. Birds chirp in the trees that surround the courtyard, which is paved in flagstones decorated with images of turtles and lizards.

“It’s a space that hugs you,” Meskerem Assegued, the center’s co-founder and director, said in an interview in late January as she sat at an outdoor table having coffee, and pointing out some of the artworks created by her co-founder, the artist Elias Sime.

Trying to add up what Zoma does is indeed challenging, as the physical space is a work of stunning vernacular architecture and art, while the programming is grounded in Addis Ababa and focused on an international stage.

The noncommercial gallery at Zoma has become one of the most important art institutions in sub-Saharan Africa, funding projects through small grants and the selling of Mr. Sime’s work to collectors and museums like the Metropolitan Museum of Art in New York.

The center’s workshop programming has included internationally known artists like David Hammons from the United States and Ernesto Novelo, a Mexican who was so inspired after his residency at Zoma that he developed a similar program in his home country, calling it the ZCAC Yucatán.

Abel Tilahun, an artist who splits his time between Addis Ababa and Washington, said: “I stumbled onto shows that blew me away, different angles that I really responded to. Zoma is pushing the envelope, making art intellectual and saying, ‘We have to get away from the status quo that limits.”’ 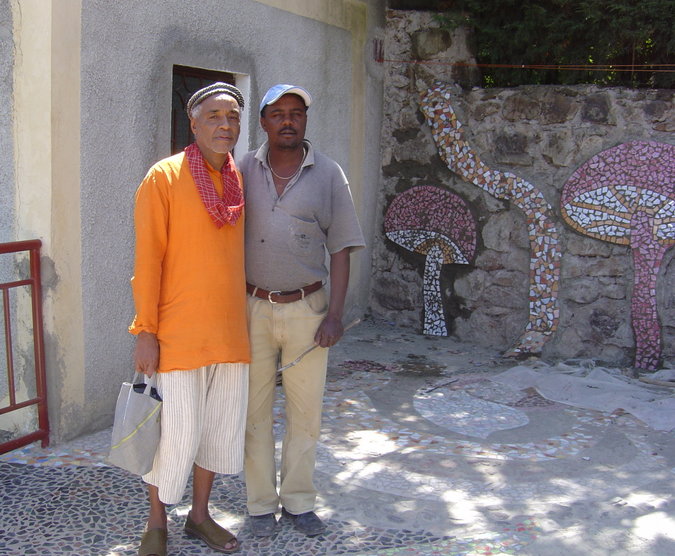 The American artist David Hammons, left, and Elias Sime, an artist and co-founder of the Zoma center, in the mosaic-decorated courtyard. Credit Meskerem Assegued

The center also makes it a priority to involve the local community in art projects and teaching, including working with street children on mural painting projects and art programs for H.I.V.-positive children.

“They are truly at the forefront of contemporary art and contemporary art happenings in Addis,” said Zoma Wallace, a curator with the District of Columbia Arts Center in Washington. Ms. Wallace has attended a few workshops at the center and is named after Zoma Shifferaw, a young contemporary artist who died of cancer in 1979.

“With every project, idea, workshop, exhibit,” Ms. Wallace added, “they are constantly pulling in the local artists and making sure they are considered for opportunities that come to Addis so that they can have exposure to processes that they might have not yet have got to in their careers.”

Ms. Assegued and Mr. Sime founded the Zoma center in the autumn of 2002. Ms. Assegued, an anthropologist who that year had taken part in the “African Museum Professionals Workshop” at the Museum of Modern Art in New York, was fresh from the success of “Giziawi #1,” a three-day arts and performance festival she had organized and produced in central Addis Ababa.

“I did not know I was a curator when I was doing that — I just felt it had to be done because of what I was observing,” said Ms. Assegued, who lived in the United States for 17 years before moving back to Ethiopia in the late 1990s. “I was seeing fear in the art community of making art.”

Under the regime of Mengistu Haile Mariam, who was in power in Ethiopia from 1974 until 1991, “if you did anything against the government or something that was socially not acceptable, you ended in up jail, getting beaten, getting killed,” Ms. Assegued said.

Mr. Sime, one of the 15 artists who took part in the festival, joined the project. After he and Ms. Assegued acquired the property in 2003 that originally was intended to be Mr. Sime’s studio and home, it took more than seven years for the complex to be finished.

Guiding a visitor around the center, Ms. Assegued stopped at a wooden door on the back building, which faces onto the courtyard. The door has carved tribal masks in an up-and-down pattern, with a hoop earring in one ear of each face. Inside the room, which is often used for video screenings, a few of Mr. Sime’s embroidered works on canvas rested against the wall; the bathroom ceiling was partly covered with a bright mosaic made from buttons that the artist collected from markets around the city.

The exterior of the separate rounded front building, which has a sunken seating area and decorated goatskins hanging from a wooden beam, was handcrafted and built in mud, straw and cactus juice by Mr. Sime, with the help of local workers. The center also includes a library with recycled juniper wood bookshelves and a bedroom for artists and curators who come for residencies. 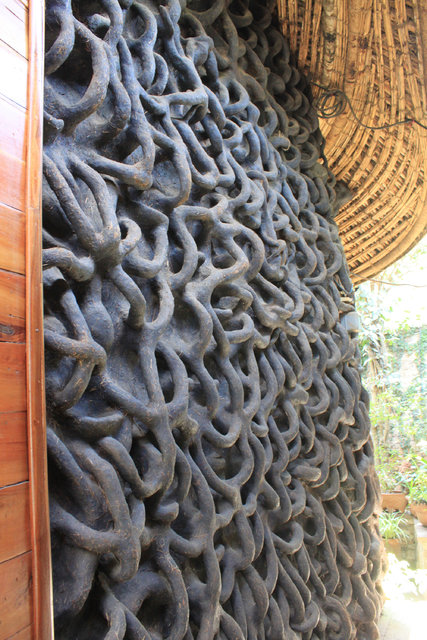 The exterior of the center’s front building was handcrafted and built in mud, straw and cactus juice by Mr. Sime with the help of local workers. Credit Meskerem Assegued

During the construction, the center put on shows and held workshops in temporary spaces in Addis Ababa. It also began a residency project in Harla, a small village in southeastern Ethiopia.

The center is also involved in constructing a visitor center in the Bale Mountains, in central Ethiopia, for the Frankfurt Zoology Society, which runs the conservation team; that project is expected to be finished by year’s end.

Ms. Assegued “didn’t give up, and it is hard to imagine staying with a project like that in the face of getting funding together in Ethiopia, with no obvious sponsors,” said Jay Levenson, the director of the international program at MoMA. “She was able to do it without that infrastructure, which I thought was tremendously impressive.”

In addition to directing the center, Ms. Assegued also has a thriving curatorial practice that she extends to running curatorial programs at Zoma and curating shows around the world.

“What Meskerem has done has been really tremendous, because in very natural ways she has been able to insist on an international platform for exchange and an international scope to her mission,” said Renaud Proch, executive director of Independent Curators International, an arts organization in New York, which held a curatorial workshop at Zoma in 2014. “It comes from the fact that she is someone who operates in different international contexts, but it is also part of an ambition for Ethiopia.”

Elizabeth Easton, director of the Center for Curatorial Leadership in New York, met Ms. Meskerem when she took part in the 2014 International Curatorial Institute for Modern and Contemporary Art, a collaboration between the center and the MoMA.

“When she talks, people listen,” Ms. Easton said. “She is somebody who in her quiet way is one of the most remarkable people I have come across in her ability to do incredible things on a global scale.”

The same can be said of Mr. Sime, whose kind eyes and low-key manner charm everyone from local children to internationally known figures in the world of culture. The theater director Peter Sellars said, “When Elias moved his studio in Addis from one place to another, the neighborhood kids were helping carry his paintings through the streets.”

Mr. Sime did props and artwork for Mr. Sellars’s production of Igor Stravinsky’s “Oedipus Rex,” which has been performed in Los Angeles and Sydney, Australia, and this year will be staged in Aix-en-Provence, France, and in London.

The Zoma center, Mr. Sellars said, “deeply represents art, not just as something that is collected and kept by the elite, but also owned and touched and engaged in by every stratum of the community.”